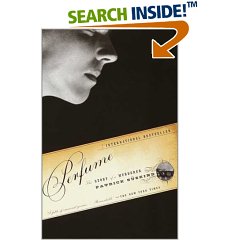 this was a good book. weird, but good. sadly, i couldn't read it in the original, german, which is the only other language i know. oh well. this is the story of a young man, jean baptiste grenouille (or something french) who has the best nose in the world. he was born amid poverty and squalor in 18th century paris and has no scent of his own. but he can smell miles away, distinguish thousands of odors and aromas and can create the most fabulous perfumes. he rises from orphan to errand boy for a tanner to the secret behind paris' most famous perfume house. this doesn't satisfy him and he goes on a quest to acquire his own scent and to create something so heavenly that all people will love him. he has never experienced anything like tenderness or belonging, due to the fact that he has no odor. it's strange and people wouldn't say that's the reason they are driven from him, but it's the reason that he has lacked human companionship his whole life. in the pursuit of scent he realizes that beautiful young women who are just on the verge of womanhood have a particular scent. so he becomes a murderer in order to preserve their odor and create perfume. it's actually not as creepy as it sounds, and yet it is pretty creepy. i would recommend this book!