Book 78: From Russia With Love 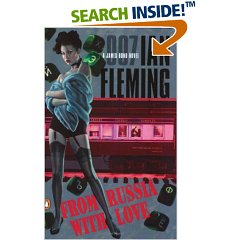 i just finished this book about three minutes ago. i like james bond movies. as long as i can remember, i have. i vaguely remember watching them when i was little, and then during a week my sophomore year in college a friend and i watched all of them in a row. i enjoyed the latest one, and so decided i should actually read at least one of the books. who is the real james bond, as ian fleming intended? this was the earliest one available, and though it's the second movie it's actually the fifth book. i guess it's just like the movie, for those of you who have seen it. a russian spy sets out to seduce bond so some other evil henchman can kill him while traveling through europe on the orient express. but of course, in a lot of whispers and "oh, james," she falls for him. the ending was a bit of a cliffhanger, which i found somewhat intriguing. i would agree that the lastest movie, casino royale, does more to capture the author's character. bond thinks and broods quite a bit, he's not always sure of himself and cares about his job, something he never did on celluloid until now. this was an incredibly easy read, and i enjoyed it. i might read some more of them, especially since it's december 22nd and am 22 books away from my goal. as soon as i finish posting i will immediately start something new.

Comments:
I hope to finish 2 more books by the end of the year. What should I read next?

Don't actually answer that question it's just a matter of choosing from my library books.