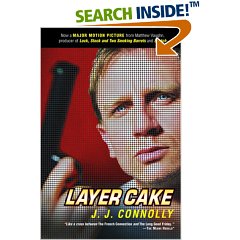 i really love most things british. maybe that is because of my parents' influence. as i just wrote, we watched a lot of public television growing up, and most of their programming seems to come from the bbc. so when i saw guy ritchie's crime capers about inept cockney criminals, i wanted to see more. so i watched the movie layer cake, produced by the same outfit. it was okay, less funny that the ritchie films, and a bit hard to follow. so i read the book upon which the film is based. it was okay. full of dry humor and more profanities than i have ever encountered in one book. yikes. i don't think i could in good conscience recommend the book due to how much the word f*#@ appears on every single page.

our hero, nameless, is 29 and has been in the london drug business for ten years. he would like to get out by age 30, but the boss, jimmy, has one last job for him. he and his partner, one mister mortimer, go looking for some rich geezer's daughter, try to unload about two million ecstasy pills and avoid the russian mob. oh, and he meets a nice girl on the way. not unlike the film, the book was a bit difficult to follow. i thought it was a little two long, and there was an awful bit of british slang. some i figured out while other words i still have no idea what they mean. clockwork orange was easier than this. it was a fast and easy read, but my eyes did feel a bit beat up, again, due to the prolific cussing. oh well.