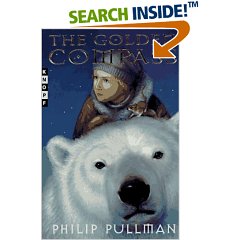 this is the first in a trilogy of fantasy books for children. i've not yet decided if i'll continue. my sister was an education major for a while, and she still might be but i forget. i think she recommended this. it was okay...but i don't usually like fantasy. it always involves strange characters with whom i just don't feel comfortable. lyra is a little girl who lives in oxford, england, but it's not our england. all people have daemons, which are little animals attached to us. i guess they are like the personification, or animal-fication of our souls. lyra and her daemon (i can't spell his name; she calls him pan for short) embark upon an adventure when her father, who until recently she believed to be her uncle, is captured. she is going to rescue him and find out why children around the country are disappearing when they meet a beautiful woman and her monkey daemon. she finds out that they are performing experiments on the children, lord asriel (lyra's dad) is trying to use some kind of dust to bridge to another world and has all sorts of problems. there are witches, balloon aeronauts, armored bears and i thought, a lot of confusion. for a kid's book, it had a pretty mature and frightening message, namely that original sin is something adults make up to keep kids in line. in our "free" society that only wants to do what feels right, i guess it shouldn't surprise me. however, i think it shows a lack of responsibility that iss somewhat disturbing. oh well, it was quick and a pretty easy read.