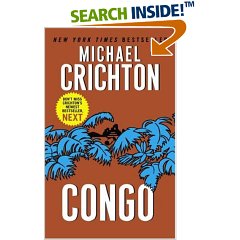 Drat. i just typed about this and then accidentally lost it. will try to remember what i wrote. started out with, wow, i want to read eragon too. am not sure that will happen any time soon. so, i'm hesitant to say this... but i will....this was not my favorite book of the year. it took forever to read because it was such a chore. this was surprising to me because it came highly recommended, and i enjoyed my first crichton novel (see post 13, or something like that). the premise of this book was intriguing as well; a scientific expedition meets something sinister and previously unknown to man in the jungle. oh my, what can this be? let's send another group of inexperienced and self-absorbed people and discover the problem. but then crichton digresses; we have to learn the history of everything he mentions...like gorillas, satellite imaging, computer chips, american sign language and lots of other insignificant (to the story but to me in general) scientifc facts that due to boredom i have blocked from my memory. and then when we finally figure out what's going on, it's kind of anticlimatic and all of a sudden the book is finished. i think he had to write about all those things in great detail because if you take that out the story itself is actually only 7 pages.

Comments:
sorry you didn't like congo. i was a huge fan, but i did read it in 8th grade.