Book 65: The Devil In The White City 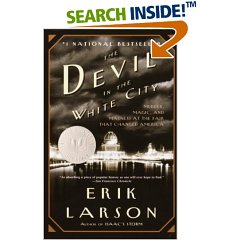 I remember when this book was a best-seller. it must have been sometime when i was doing quite a bit of traveling, because my memory of it has to do with airport book shops. then i saw that anne read this and liked it. that must mean it's a good book. it has been quite some time since i've liked a book so much that i can't wait to get home and read it. that's how i felt abou this book. it was engaging, interesting, suspenseful and thoroughly satisfying.

if you read anne's post, you probably don't my to give you another synopsis. i found the comparison between burnham and holmes fascinating; as each built his empire i read with rapt attention, watching their plans unfold. one dreamt of architectural supremacy and a city so grand that the world would not be able to forget; the other of hideous secrets and a castle full of death. the writing was informative yet tasteful, especially as larson recounted the horrors young women met in dr. holmes. this was the perfect amount of mystery and information for the reader.

i have only been to chicago once. i now want to return and go to all the places mentioned in the book. although the fair is gone, some of the buildings burnham and his partner constructed remain, as well as the park that housed the fair. a couple of buildings from the white city were turned into permanent structures, and it would be interesting to see them again knowing their past. so many interesting things came about from the fair: shredded wheat, ferris wheels, the midway to name just a few. i would also like very much to see the corner on 63rd street, the corner where HH Holmes built a peculiar and gloomy building filled with secret chambers, soundproof vaults and unusually large and hot kilns.

Comments:
This was one of the best books I've read this year. I'm glad that you also enjoyed it. I'm starting to think that at the end of the year I'm going to do a closing post and a summary maybe with rankings for my books. I can't believe how close we are to the end of '06. Do you think I'll make 100?