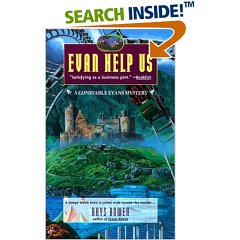 so i am at home in pennsylvania, visiting my family. i really do enjoy being around them and dislike the fact that i live as far away as i do. it's a seven hour car ride, and i just don't have the time to visit them. and isn't there just something nice and comforting about home? especially in the fall, when it's good to sit around, reading and snacking on dad's homemade chex mix, drinking hot apple cider. very picturesque. anyhoo, my mom has been reading another murder mystery series, and she gave me this one to read during my visit. that's why i'm telling you all about being at home.

this is another series in the vein of hamish macbeth: a local village constable, colorful local characters, a somewhat silly mystery and easily read in two hours. evan evans is our hero of llanfair, north wales. apparently evan and evans are very popular names in wales, as no fewer than six characters seemed to be named evans. they are helpfully labeled by their occupations...evans the butcher is always referred to as "evans-the-meat"; the milkman as "evans-the-milk." how odd the welsh are. evans, like his scottish counterpart macbeth, has a love interest. her name is bronwen and she's the local schoolteacher. i have a friend from college who's second child is a little girl named bronwen. when i heard her name i thought, wow, people my age have multiple children and wow, that makes me think of paper towels. back to the book. a nice old colonel is murdered, and then the prodigal son who wanted to turn the quaint village into an amusement park is the next to turn up dead. evans is told not to interfere, being merely the local bobby, but we know better. with wit and insight far superior to the city cops, evans solves the case. it was okay.