Book 55: A Murder, A Mystery and A Marriage 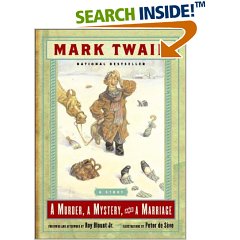 i enjoy mark twain. actually i'm not sure why i say that because i've never read any long book by him, at least i don't think so. but he's rather funny...with such a dry sense of humor. this was a short book that was found upon his death and published fairly recently, as i believe the introduction said. it's about a cad from france trying to marry a sweet and rather stupid missouri gal who's come into some money. i liked the illustrations immensely. it was a cute story and i was able to read it in about an hour. so that was even more fun.

mark twain reminds me of when my family would drive out to colorado every other summer. one year we stopped in hannibal, missouri, which is the hometown of samuel clemens. we took a tour to see his house, the cave where tom sawyer and becky-what's-her-name were lost and the graveyard where injun joe hung out. actually, i'm not sure if any of those previous assertions are correct because i was only about nine or ten at the time. and i've never read tom sawyer. that was just one of the things/places my mother would drag us to see so we could be cultured and learn something important. i'm not sure how cultured they were, but we've seen every tacky tourist spot (and the untacky ones too) this side of the continental divide. my parents own album upon album of surly-looking children in front of prairie dog towns (usually ones that housed genetic mutants, like a six-legged cow), Abraham Lincoln's log cabin, complete with re-enactors, the Buffalo Bill museum, a roller skate museum (somewhere in Kansas), Wall Drug in South Dakota, stupid stuff in Indiana, old west towns in Colorado, rodeos in Wyoming and the Elvis is Alive Museum (if it's still in operation, it's just west of St. Louis on I-70 and worth the trip). Ah, what memories we have in our family. I do hope to have my own children someday so that i can put them through similarly tragic experiences. i think due to overexposure as a child, i eagerly look forward to both the historical and the absurd.