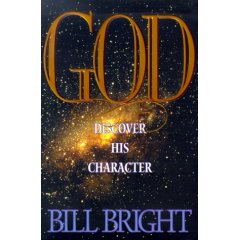 i know, i know. i have not been reading as i ought. this is partly due to the fact that i know have cable tv and am often taken hostage, against my will, by vh1 countdowns. i recently was forced to relive my junior high and high school years, in the form of i love the 90s. it was pretty awesome. but i will start reading fervently soon. i'm also a bit sad, as i just don't love any of the books i'm reading. i want to get sucked in and have the wonderful feeling of anticipation...i keep hearing despite its length, atlas shrugged is engaging. perhaps will try it.

this book, by bill bright, the founder of the organization for which i work, was easy to read and yet very good. he is not like many christian authors, who kind of bend scripture to make their points and have only the vaguest biblical grounding for their theses. he sticks to the simple and yet amazing truths of who god is. i liked how each chapter dealt with an attribute of god and then had a page for life application. the first application was usually something about meditating on the truths and allowing them to change our hearts. i liked that. and it was so easy to read! now, only 47 more. 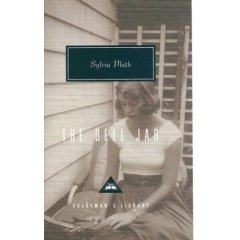 Although well written, The Bell Jar by Sylvia Plath was not very enjoyable to read. It was a depressing story that I really didn't want to finish. But for the sake of my book numbers I decided to just finish it. The first half seemed to be a decent story of a college-aged woman coming of age. Then all of a sudden she started to go crazy and the second half detailed her time spent in a mental home recovering from her suicide attempts and depression. I know its considered a classic but it wasn't very uplifting to read.

#46: Invitation to Solitude and Silence

Invitation to Solitude and Silence was another book that I finished this weekend. I thought the book was decent and it reminded me of the importance of spending and guarding my time in solitude and being silent before God. The author, Ruth Haley Barton, detailed her journey to solitude and silence in God's presence while encouraging the reader to practice solitude in his or her own life. Her overall premise was this solitude and silence is what will ultimately help us to know and experience God at the deepest level. I was challenged by some of her ideas but by the end of the book it seemed like she was repeating herself. I really liked one thing she said so I will end this post with the quote. "Without solitude we are dangerous in the human community and in the Christian community, because we are at the mercy of our compulsions, compelled by our inner emptiness into a self-oriented, anxious search for fullness in the next round of activities, accomplishments or relationships." 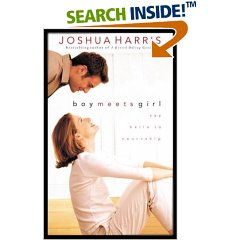 I really enjoyed reading the book Boy Meets Girl by Joshua Harris. For a little background, Harris wrote the popular book for Christians called I Kissed Dating Goodbye in effort to encourage people to make the decision to give up the casual dating game and focus on serving God as a single. A few years later he followed up that book with Boy Meets Girl: Say Hello to Courtship. This book offers wisdom from the biblical perspective for those who are in or desire to be in non-casual dating relationships. Harris calls this courtship but spends a whole chapter explaining the mindset not the terminology is important. Throughout the book Harris shares several stories from his own experience courting/dating his wife and gives very practical advice centered on honoring God in any relationship to explain this mindset.

Book 52: The Other Boleyn Girl 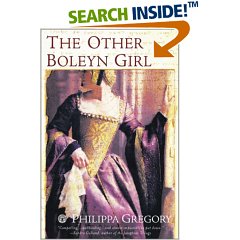 this was yet another 600+ page book i chose to read this year. these are foolish choices. this book, as well as other such historical fiction novels by this author, are everywhere. so i decided to check this one out. it chronicles the relationship between mary boleyn and her infamous sister, anne. mary tells the story of her rise to power as king henry viii's mistress and then her fall as her cunning and beautiful rival, her sister anne, ensnared henry to become his second queen. i suppose it was interesting, as it is a period of history i generally enjoy. however popular she might be, i don't think phillippa gregory is a terrific writer. her style is fairly straightforward and easy to read, if a little dull. i suppose she had a lot of ground to cover in the 15 years of our story, but there was little characterization or description. this is how it felt: "we did this and then he said that. and then this happened and it was nice. and then that happened. and then this." and so on and so forth. for such a thick book, it was quite easy to read, and so not bad. i'm not sure if i will read another. they are somewhat vacuous reading, and i think i've had enough of that. will move on to bigger and better things, hopefully. i have been quite lazy and undisciplined in most areas of my life the past month, not least to say in my choices of ridiculous reading material. Drat! I hate when they have those funny arrows telling us to look inside the book. oh well. i suppose that's better than no visual aid at all.

Book 51: The Knight and The Rose

So this was about the beginning of the War of the Roses. I hope you all know about that. Can't find a picture, but oh well. It was okay, as I do enjoy history. Sorry these are such short posts, but sadly the last few books I've read don't have much redeeming value that merits comment. Maybe I need to ready something heavy. 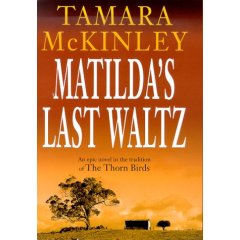 At last, am halfway to the goal! Hm, i don't want to be down on myself or anything, but I'm not sure I'll make it to 100. But I'll keep trying. So, this was about a sheep station in Australia, which is why I read it. I searched for Australia in the card catalogue. It was a sweeping drama, said the cover, and it was okay. A little silly, but picking up some slang was worth it.

#44: Just Walk Across the Room

I just finished reading the book Just Walk Across the Room by Bill Hybels. I bought it about a month ago at a conference I went to at Willow Creek, the church Hybels pastors, in the Chicago suburbs. I was interested in the book because it appeared to be a challenge to evangelize more effectively in everyday relationships and encounters. Hybels challenges the reader to get up and walk across the room, if that's what it takes, to engage in relationship with people. He outlines the three D's he uses in evangelism of Developing friendships, Discovering stories, and Discerning the next steps to take. Hybels stresses the importance of being sensitive to the Holy Spirit's leadings when it comes to relationships with people. I enjoyed this book and would recommend it to anyone who wants to be challenged to share Christ with others. The stories that Hybels shared were interesting and the way he intertwined scripture was encouraging.

Murder Unleashed by Elaine Viets was dumb. Don't waste your time reading it. 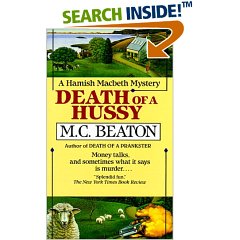 So to try and read lots of books quickly, I return to this mystery series. It might have taken two hours to read this. It was okay; again i found the pathetic female character irksome and, well, pathetic. There really isn't much to say about this one, except that Hamish MacBeth does it again. yesterday and this morning i spent some quality time at the laundromat. Is that how you spell that word? It was pretty great. I am looking forward to my times there, as all sorts of interesting people do their laundry there. it's expensive, so i'll have to start wearing all the clothes sitting at the bottom of my drawers that i forgot i owned. Maybe i'll even go back today for the penn state game. how exciting. okay, this isn't about books anymore. being surrounded by the breadth of human nature at the laundromat does make me want to watch my favorite documentary movie of all time: Trekkies.

Book 48: Everything Is Illuminated 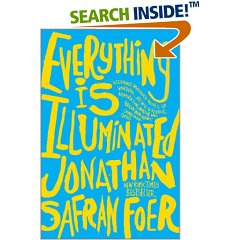 I read this book because I saw a preview for the movie. It looked like a creative and interesting film, yet I always try to read the book first. Maybe I'll still see the movie, if i can get if out of the library for free. This book took quite a while to finish. It started out humorously and entertaining. I wanted to keep reading to find out what happened. Would they find Augustine? Would Sammy Davis Jr, jr, the deranged dog, eat all the heroes papers, leaving him stuck in Ukraine indefinitely? If that sounds confusing to you, that's kind of how the second half of the book goes. The story is the correpsondence of Jonathan, an American Jew, and Alex, a Ukranian translator and employee of Heritage Tours. Alex and his Father run a touring company for Jewish Americans who would like to find their families, or what's left of their families' homes in the aftermath of World War II. Jonathan is a college student who has a picture and two names: Augustine and Trachimbrod. Augustine is the woman saved Jonathan's grandfather from the Nazis when they destroyed their small Ukranian village of Trachimbrod. So one chapter is Jonathan's novel, a story of his family starting with an ancestor, Brod, in the late 18th century. Then a chapter is a letter from Alex, and one is about the adventures Alex, his grandfather, Jonathan, and the crazy dog are having. It is somewhat interesting how the story moves both backwards and forwards, but it became extremely dull. I suppose critics would call it creative and artistic, and I generally enjoy that kind of thing. Maybe it has something to do with Jewish culture, being an outsider, that I just don't understand. I felt there were many references to the life of the synagogue, etc, that I didn't understand, and so perhaps that is why I had difficulty in grasping the plot. And towards the end it was a bit sad, but I was actually elated when it was over.

Book 47: Made In America 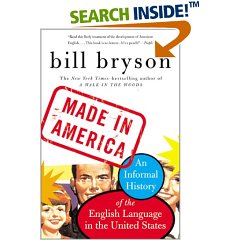 I just cannot get enough of Bill Bryson. Speaking of which, Bill, why have you not responded to my pleas for your attention? You apparently don't read this blog, nor do you care that your biggest fan is feeling a bit snubbed. Anyhoo, this book, like all his others, was great. It's all about the English language we Americans speak. I learned all sorts of useful tidbits about where we get certain expressions, which phrases are actually quite old that we still employ and have died out in England (such as "fall" for autumn), and some lovely historical facts. Not only does Bill take us on the journey of the making of American English, he also gives insight into the icons of our culture that spawned our phrases, idioms, etc. It was very interesting. I am going to start one called Mother Tongue, that's about English in general. A very good, entertaining and informative read. I am also excited about his forthcoming book, a memoir titled in a suitably ridiculous fashion, Thunderbolt Kid, or something like that.