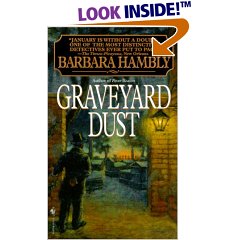 again, a mystery. as i look at the books i've read this year, i guess i should start on some more useful, or heavy things. but i really like to read in order to escape, so i like these kinds. this is the third in a series i discovered last fall. benjamin january is our hero, and he's a free colored man in old new orleans. having been born a slave, he was freed when a frenchman bought his mother and her children and made her his mistress. in these novels one enters the complex social system of the creoles, free coloreds, and slaves of lousiana. i have learned that free blacks had an entire system and nowhere else in america, and it's pretty fascinating. in this installment, olympe, january's sister who is a practioner of voodoo, has been arrested for poisoning a man. so january, surgeon and musician, sets out to find the true killer. along the way his life is threatened several times, we meet the queen of voodoo in new orleans as well as other colorful characters and dodge bronze john, as yellow fever was called.

this wasn't as good as the other two i've read, but i like the world barbara hambly creates. i might have mentioned this earlier, but we tend to romanticize the past and think that living in the old south, or any other time, might have been better and/or more exciting now. but that's not true. hambly accurately recreates the world of new orleans in the 1830s complete with the danger and dirtiness of life back then. january is three-quarters black and he is a free man, and yet he fears for his life every time he leaves his house, particularly when he leaves frenchtown (with the safety of colored society) for the rougher and less couth american side. he is thrown in jail, attacked and beaten quite often, all because he is not white. even though he is free, he was almost captured to be sold to cotton plantations up north in mississippi. i don't think that i have or ever will feel the fear he did, me being a white american, unless maybe i move to saudi arabia or iran. i am not saying that i know how it feels to be in a minority as a result of reading these fictitious stories, but i do think hambly gives the reader a rare opportunity to enter a completely foreign world and empathize with a character who's only sin is being black. i would recommend these books.

Comments:
Looking for information and found it at this great site... » »