Book 35: I'm a Stranger Here Myself 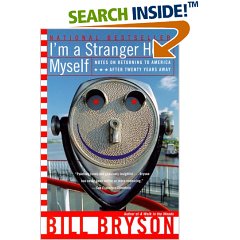 oh my word, another hilarious triumph from my new favorite author, bill bryson. this is book number four by him this year, and i still have two more in my possession to go. this one is a collection of newspaper columns he wrote for some british paper in the year or two after he moved back to america. he comments on everything, from post offices to winter sports to why no one in america walks anywhere. he does all of this, of course, with great depth of insight, razor sharp wit and dry sense of humor. because of its short chapters i found it quite easy to read, and probably more so than his others. it went very quickly and of course, i recommend this book. my favorite part is the article entitled "fun in the snow" where he describes receiving skis one childhood christmas. one can only imagine the hilarity that might ensue, and i literally laughed uncontrollably for about five minutes. indeed just thinking about that exploit of his makes me giggle even now. i just so enjoy bill, and i think not only is he amusing but also insightful and honest in his comments about, in this case, the differences between america and great britain. and i gather from this book that he has a son around my age. i wonder if he's single, and as wildly hilarious as his father. bill, if you or your son should happen to read this, by all means post a comment letting me know my chances. i'm pretty fun.

Comments:
i need to read another book by bill, he is hilarious. you should read a walk in the woods. i read that one just before the 2006 reading frenzy started and i enjoyed it a great deal.

You have an outstanding good and well structured site. I enjoyed browsing through it Goedkoop bellen cheap calls naked girl in a bathtub parental control per period Buspar www latinas

Looking for information and found it at this great site... video editing schools