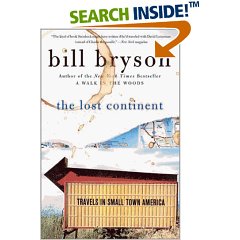 Yet another book by my new favorite author, bill bryson. i have now read three. and i received two more as gifts that i must read. actually, i think i need to take a break from these books. i am still thoroughly enjoying travel books and his rapacious wit, however how different are they really? he travels to lots of small towns and makes fun of the people there while giving us interesting factoids about said towns. in this volume he is traveling around america, starting in his home state of iowa and taking us with him on his adventures. i enjoyed this book. the one about australia is my favorite so far, but this is a close second. since he is writing about america and some places i've actually been, it made it all the more humorous. rather than continue to describe the book, i'll let him tell you what he thinks about the lost continent.

while watching tv somewhere in the south: "the preparation-h commercial vanished and was replaced by a clapping audience, the perky sound of steel guitars and happy but mildly brain-damaged people in sequined outfits. this was 'grand ole opry.'" and from looking at the evangelical road signs littered beneath the mason-dixon line: "I particularly fancied having the bryson city church of christ sign beside my front gate in england and being able to put up different messages every week like REPENT NOW, LIMEYS."

about washington dc and all the government stuff: "Across the street there is a permanent settlement of disaffected people and crazies, living in cardboard boxes, protesting at the Central Intelligence Agency controlling their thoughts from outer space. (well wouldn't you?)"

and on the curiosity of having columbus as a national hero, with columbus day and all that: "if you ask me, the Vikings would make far more worthy heroes for america. for one thing, they did actually discover it. on top of that, the vikings were manly and drank out of skulls and didn't take any crap from anybody. now that's the american way."
so there are some tidbits. highly recommend to anyone.