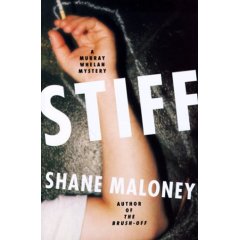 for this thirty second book i return to australia and the world of the hard-boiled sleuth, in the forms of melbourne and murray whelan. i was so taken by my first book by shane maloney, "the brush-off" that i looked everywhere for more of his books. sadly they were nowhere to be found. then i discovered that you can order used books and other items for ridiculously cheap off amazon.com. so i bought this one for about 60 cents. there was maybe $3 shipping, but a book, a hardback book, for $3.60? that's nothing to sneeze at. so i got this book. i love mysteries, especially for the beach, so this seemed like the perfect beach read.

well, it wasn't as good as the first, and i was a bit disappointed. in this installment, we actually go back in time, so it's like the prequel to "the brush-off." a turkish worker at a meat packing plant is found dead and frozen in one of the company deep freezes. our protagonist, murray, works for some political ministry having to do with the interior, or whatever and so he is called upon to investigate the matter. he is to make sure that the government will not be culpable for the man's death. so we start a wild roller coaster ride of intrigue and ridiculousness. murray juggles his job, his failing marriage, his eight-year old son red, his attraction and pitiful attempts at picking up young beautiful women all while running from corrupt meat packers who are seeking to end his life. it was okay, if a little confusing. murray in this volume is a little too hard-boiled. it seemed that the text was made up of not so much dialogue and then description, but quips and sarcasm. it just made it a bit hard to follow. will i read more? perhaps. especially if they are cheap. this one had less description of melbourne and australia in general, also a disappointment.

oh, in case anyone was wondering, i am sad about the socceroos recent defeat by italy in the world cup. i suppose i shouldn't be surprised, our friends from down under up against a traditional powerhouse like that. i was cheering them on and even looked into buying an inflatable boxing kangaroo. argh! cannot post picture. will attempt later.

Comments:
i'll try not to read this book. it sounds kind of like a bummer. i'm having a little trouble with the library right now because i owe too much in fines to be allowed to check things out. i need to go in and pay tomorrow.