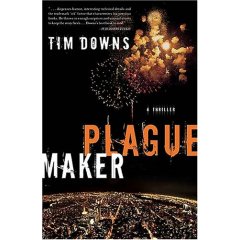 This was not a great book. It was written by Tim Downs, a Christian who is trying to write books that have spiritual messages but are not "Christian." Maybe because I knew he was trying to put something spiritual in there I found it a bit overpowering. Well, it was just boring. The cover announces it as a thriller, and yet there was nothing thrilling about it. A bitter old Japanese man is seeking to destroy America using the strain of bubonic plague he developed during WWII. Nathan Donovan is the divorced and tortured FBI agent who is working with Li to catch the plaguemaker and reunite with his ex-wife (hint hint he's bitter). I knew what was going to happen, and there wasn't really much going for it. I wouldn't really recommend it. A squiggle.