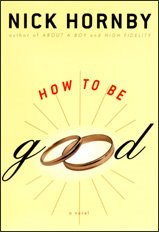 Even though I didn’t really love it, Nick Hornby’s book How to Be Good was interesting and intriguing to read. When I first started reading it I contemplated not finishing it, but then I couldn’t put it down. Nick Hornby tells the story of a woman who has been married for around 20 years and is faced with the fact that she doesn’t like her life, her husband is often terrible to live with, and she has been driven to an affair. So, the book opens with Kate telling her husband she wants a divorce over the phone. Then David (Kate’s husband) meets a spiritual healer named GoodNews and his, and his families, life is changed forever.

While Kate is skeptical and sarcastic about David’s spiritual conversion, David has given up his anger, sarcasm, and otherwise rude habits because of his relationship with GoodNews. GoodNews and David team together to conquer the problems of the world; including but not limited to hunger, homelessness, and the middle and upper class living too ostentatiously. The funny part of the story is their spiritual beliefs lead to many humorous conversations with Kate and their very confused children.

Aside from the dry humor, while I was reading this book I was intrigued by the spiritual side. The characters David and GoodNews were both compassionate towards the poor just like Christians are called to be and did more for the poor than most Christians I know, myself included. But, it was sad because they had nothing to put their hope in. They just want to help the poor because it was “how to be good”. Kate was often racked by guilt because no matter how hard she tried to be good, she could identify so many areas of wickedness in her life. She was never given any hope. Although the book was often hilarious, it was full of very dark humor and was very hopeless. I praise God that I have hope in my life because I know Jesus Christ died for my wickedness and I don’t have to learn “how to be good” to know that my eternity with Him is secure. Yes, I want to be good and please God but nothing depends on my ability to be good, only Christ’s ability to be good for me. And when Christ died on the cross my sin became His and His goodness became mine. And the best part is, He wanted to give that gift, to me and everybody else.

Comments:
so glad you read this anne. i liked his newest, a long way down. another i think i'd like to read is the polysyllabic spree, a collection of essays about reading. so, i'm still plugging along. will hopefully blog tomorrow about at least two books.