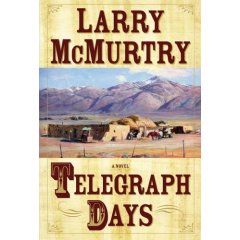 Well, this Western novel took forever to read. The only other Western I have read is Lonesome Dove by Larry McMurtry so when I saw Telegraph Days also by McMurtry I was intrigued. The book flap claimed this book to be McMurtry's most ambitious Western since Lonesome Dove. So, I quickly got the book from the library and then slowly read the book. I am convinced that the setting of the slow paced American West after the Civil War caused me to read this book 5 times slower than other books. There was never a point in the story where I was asking myself what was going to happen next or really ever on the edge of my seat. But with that said, I still greatly enjoyed the book. I laughed a lot and was amused by the wide range of characters.

The main character and narrator of Telegraph Days is a young woman named Nellie. She has a lot of smarts and is very “organized”. Throughout the course of her life she runs a telegraph office, writes novels, works for the famous Buffalo Bill, meets the infamous Earp brothers, Doc Holliday, and Billy the Kid. Nellie is witness to gunfights, the changing western frontier, the frequent deaths of loved ones, and the start of what later became America’s fascination with the West as specifically seen in Hollywood. I don’t know if everyone could read this book and enjoy it, but I thought it was great.

Wonderful and informative web site. I used information from that site its great. » » »