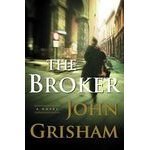 I heart John Grisham. The first book I ever read by him was The Firm and I've probably read it 5 or 6 times. Almost everytime I read one of his books I love it. If I don't love it, I at least like it. This afternoon at school I finished reading Grisham's most recent book, The Broker, and I was not disappointed.

This story line wasn't Grisham's typical law firm/lawyer/trial based story, but it was an interesting story. The basic idea is this...A formerly powerful broker, Joel Backman, was imprisoned for 6 years and then pardoned by the president 14 years early because of the CIA's interest in his case. Specifically, the CIA was interested in the information Backman had obtained about one of the world's most sophisticated satellite systems. The catch was the CIA wasn't planning on getting any information from Backman but was waiting to see who killed Backman. The nationality of the assassins would give the CIA the information they needed. I'm not going to tell you anymore about what happened...you'll just have to read it and find out yourself.

Comments:
so i got roped into myspace by a friend. i decided i'm not interested in looking at profiles i see of people everyday, so i looked for someone from australia and invited them to be my "friend." i hope they say yes. i'm kind of pathetic.

that is not pathetic. you really need to work hard at making friends from down under. that way when we go there we'll have people to see and stay with!

Where did you find it? Interesting read »