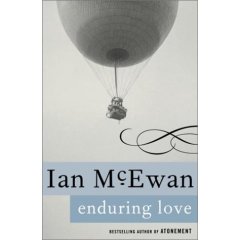 this book has been made into a movie. i saw the trailer a couple of weeks ago and thought it looked interesting, but i usually try to read the books first. this was a great novel. the writing has a dreamlike quality that pulls the reader in. i felt as though i was watching the events of the story unfold through a window on a rainy day. that might not make much sense, but it had a pleasant effect.

joe and clarissa are academic types, a childless couple living in london. clarissa is a professor of keats and joe, having once been on the path to research scientist, is now a free-lance science writer who is calm, rational, and well, scientific. they picnic one day near oxford and the events of that afternoon throw them into a whole mess. there is a ballooning accident; joe and several other men try to rescue the man and boy struggling, and one of the men dies. through this joe begins to feel guilt at his own survival, and he meets jed parry, another one of the would-be rescuers. parry begins to harrass joe, waiting outside his flat, believing joe is sending him messages of love. parry is determined to bring joe to god and to begin the love relationship he has deluded himself into desiring. it's was bizarre, but a book that i looked forward to reading. i think one of the most interesting facets of this book is the juxtaposition of joe's clinical and scientific mind with parry's, and then the unraveling of joe's mind and relationship with his wife as a result of paranoia. one thing i did find disturbing was the fact that wacko parry talked about god all the time. why do stalkers and serial killers in media always end up being "religious" while those who are sane and normal are the rational atheists. that's not quite fair. anyhoo, enough of this post. i liked the book and i requested the movie from the library. i think i would read more of ian mcewan.

Comments:
for anyone who cares, the movie was good but as usual, the book was better.