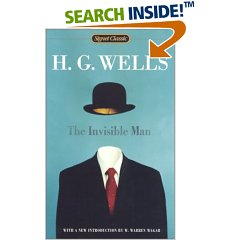 so i read this book because i like to do crossword puzzles. what, you ask, does that have to do with anything? well, there are only so many puzzles clues. and one of them is always about the thin man's dog. so then i thought i should read that book since i'm always penciling in the name of his dog in my little book, but got confused at the library and checked out the invisible man instead. it was okay. i don't usually go for science fiction. this story by h.g. wells is about griffin, a brilliant young mind somewhere in england at the turn of last century. he's not only brilliant, he's selfish, grasping and unkind. in his ambition and recklessness to distinguish himself in his field of physics, he kills his mentor and discovers a way to make himself invisible. weird. so he then burns down his house, for reasons that presently escape me. this forces him to go on the run in search of some missing scientific journals. in the process he terrifies several villages, meets up with various people and coerces them into becoming his evil minions and strives to produce a reign of horror by stealing and killing. again, it was okay. i won't tell you what happens at the end. if you really want to know, i'll tell you. i doubt i will read more of wells' work. it was reminiscent of frankenstein, which i read earlier this year. can man do the scientifically impossible and unnatural? and should they? is science for man's gain acceptable and morally right? apparently not in this case.

wow! we might be fairly far off in our individual reading goals, but anne and i have read 103 books combined this year. i hope to be finished with sixty by the end of this week.