Book 45: Death Of A Prankster 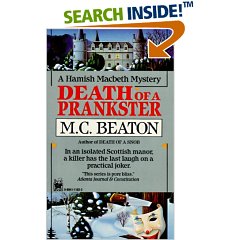 I have got to read more of these books...i finished this one in just under three hours. We travel once again to the highlands of Scotland to some inpronounceable village where Hamish Macbeth is the local constable. This time a nasty old man who of course has millions dies. He's a horrible prankster and falls victim to one of his own jokes: he falls out of someone's closet with a knife in his chest. Who done it? One of the daughters, the adopted and ne'er do well son, the clutching actress, the estranged brother and his greedy wife? Well I won't tell you. You'll just have to read it for yourself.

MC Beaton does seem to always bring a little bit of calss warfare into her books. In this the third I've read, there's always at least one character with humble, working-class background who is trying not to give that away. And there's always some upper class twit who is unkind to that pathetic character. I suppose she just wants to make it interesting and help us to like some of the characters and dislike others, but it just seems to make everyone a little desparate.