Book 43: The Crusades Through Arab Eyes 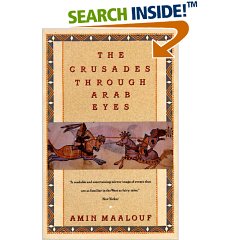 This is something I've been meaning to read for a couple of years now. During college I took an entire course on the crusades which was very interesting (filled with those sorts of history majors who like to dress up like people from the middle ages). I saw the Orlando Bloom movie about the crusades with my heartthrob struck sisters last summer (it was okay) and what with the current state of affairs this seemed a timely choice.

I liked it, I enjoyed learning about the history from a different perspective. The author, whose name I forget, wrote about the time period between 1096-1244. There were other crusades after this time period, but mostly took place outside the middle east (the reconquest of Spain from the Moors, for example). I thought he gave a surprisingly balanced and shall we say, kind picture, of this military venture. He didn't mince words about the atrocities of the Frankish armies, but he wasn't overly kind to the Muslim forces either. But he did present the facts: this was an invasion of peoples' homelands for little more than economic and political gain. The Europeans were especially cruel and bloodthirsty, and it's hard to admit but there is really no excuse for such barbaric actions.

As a Christian, it's difficult to come to terms with the Crusades. In Germany today, for example, the word "crusade" is never used figuratively, as it might be here in America. They are simply not something thought of in any kind of positive light. They did, however, introduce the western world to spices, oranges and other delicious and useful things. The downfall of the Arab world, the most civilized society in the early medieval period, began to be eclipsed by the rise of the West. How could such awful things be done in the name of God? Why would any kind of God allow that to happen? How do we even reconcile the deeds of Richard the Lionheart, who mercilessly slaughtered thousands of men, women and children on his quest to regain Jerusalem, with the hero of merry olde england we all believe in? I'm not sure. I don't think the trite answers work. It's not okay to just say that those people weren't really Christians and it was just a political thing and the Muslim people should just get over it because it's been almost a thousand years already. But I don't know what the solution is. I'll tell you this much though: while I don't think that terrorism is in any way right, and the conflict that is happening currently is not good, I do think I can empathize more with an Arab people who have bitter memories of a West that seeks only to kill and destroy.

Comments:
This is very interesting site... »