Book 12: Eaters of The Dead 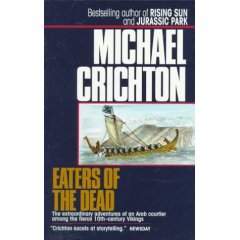 Cable tv is wicked. i grew up in a house without cable. it always seemed so exotic and mysterious and we always wanted our parents to break down and subscribe. but they never did, and so with the exception of one semester in college, i have never lived in a house with cable. until...now. recently some work was done to our townhouse complex, resulting in new cleaner siding, and weirdly enough, cable tv. at first we watched it avidly, afraid that it would disappear when we turned off the set. but it's been a couple of months now. so, the point of all this babble is that sometimes i am totally and uncontrollably drawn in by the nothing that is on tv. i waste endless amounts of time flipping channels and watching everything. my two new favorite channels are fitTV, with documentaries about fitness and a reality show called The Gym, and the SciFi channel. i don't even like science fiction, but i like Mystery Science Theater 3000 and the strange movies they show. So, this past weekend the movie "the 13th warrior" was playing on endless loop. i watched more of it more times than i care to admit. it's not a great movie, but it made me want to run around in the mountains. i decided to read the book.

this is my first michael crichton book. i really enjoyed it. i loved that it was a retelling of the beowulf story, another piece of literature i would recommend. one thing i found refreshing was his characters' matter of fact outlook and to-the-point-ness. guess i've been reading a lot lately that's by SNAGs, meaning Sensitive New Age Guys. not new age like yanni, or meditation, but just very in touch with their emotions and listening to a lot of john mayer and the like. not that that's all bad, but as a woman whose favorite response to be people is "suck it up" i can only stand so much male melodrama. so this was nice; they just hack people up and are finished doing their job. makes me think people had to be much more practical in the past. so, good book, now must go and continue reading. it's spring break and am attempting to read a book a day to catch up.

Comments:
crichton is on of my favorite authors. i would suggest all of his books as great reading material.

so started the australia book this morning. already it's hilarious. i love when he's talking about the japanese group that set off an atomic bomb, and no one noticed for four years. we should save and vacation there together.

how about the summer of 2008. i might have enough money saved by then.

This comment has been removed by a blog administrator.

I have not read this book but I found one scene in the movie really intriguing. It is the series of campfire scenes through which we are supposed to imagine the Antonio Bandaras' character learning to speak Norse by listening and watching his travel partners talk and jest around the fire. At one dramatic moment he speaks fluent Norse in answer to an insult. Cool, but not very believable. Still I liked the movie. Will I like the book?

dad, i think you'll like the book. it's short and i read it in maybe two sittings. try it out!

Wonderful and informative web site. I used information from that site its great. » »